The multi-colored Asian lady beetle, like a variety of many exotic species, it has readily adapted to climates and habitats in the U.S. As with nearly all lady beetles, it is a highly beneficial predator on a variety of insect pests, especially aphids, in food crops, trees and landscape plantings. Trouble occurs when populations buildup and large numbers of beetles enter buildings in the fall to hibernate. During unusually warm winter days and in early spring, the beetles wake up and crawl into areas of buildings inhabited by people. Since lady beetles are a significant natural defense against aphids and other pests, it is important to correctly identify the Asian lady beetle and use restraint with the use of pesticides or other management tactics.

Here are some facts from Answered by Tom Ellis, MSU Department of Entomology

Every time I read something about ladybugs the author always mentions their importance for controlling aphids. What’s an aphid and why is it so important to control them?
The insect group we call aphids, (also called plant lice) is a large group of small (fruit fly-size), soft-bodied insects that are often found in large numbers sucking the sap from stems or leaves of plants. They feed in colonies that often contain large numbers of individuals. When aphids feed, they damage plant tissue creating a loss of plant fluids and the photosynthetic tissue needed to produce energy for plant growth. Over time, this causes loss of plant vigor. Aphids also transmit many plant diseases. Ladybugs are efficient and effective predators of aphids of all kinds. This is especially important to farmers as loss of plant vigor in their crop means a smaller harvest. The presence of a ladybug population effectively controlling aphids means less insecticide use and a greater profit after harvest.

How can I tell a multi-colored Asian lady beetle apart from the ladybugs (or lady beetles) most of us are familiar with?
This can be a little confusing because multi-colored Asian lady beetles are highly variable. While they all have the same shape they do not all share the same coloration and pattern of black dot marks. The color of their wing covers range from pumpkin-orange to mustard-yellow and even jet-black. They may have no black spots or as many as 20 of the ebony polka dots. In Michigan, the vast majority seem to be mustard-yellow and the number of spots range from zero to eighteen. Despite the wide variation in background color and number of spots, they all share a distinguishing mark on their pronotum. Viewing the beetle from it’s topside, the pronotum is that small section that separates the head area from the abdomen (where the wing covers start). There is a mark on the pronotum that looks like a “W” or “M” depending upon whether you are looking at it from the front or rear. All multi-colored Asian lady beetles have this mark that domestic ladybugs lack.

Where did the multi-colored Asian lady beetle come from?
This insect is native to northeastern Asia.

Why do so many multi-colored Asian lady beetles show up in and on my house in the fall and sometimes lasting right into spring?
In the fall of the year, multi-colored Asian lady beetles begin to seek out cavities where they will spend the winter hibernating. They require cavities that will stay cool and dry and offer concealment. Throughout their native range in Asia, the adult beetles seek out cavities in cliff faces and other naturally occurring cool, dry cavities. In our part of the world, they have found equivalent winter quarters in the exterior of buildings. They are most commonly found gathering in the fall on the sun-facing exposure of the building –usually a southern exposure. This activity often results in the beetles getting into the inhabited portions of the building. In the spring, they will all leave.

If the multi-colored Asian lady beetle hibernates all winter, why do I get them in my house in the winter?
Even on cold winter days there are often times when the wind is calm and it is sunny. On these days (especially later in the winter when days grow longer), there is sufficient radiant energy on sunny exposures (especially southern exposures) to warm the siding. If the temperatures where the beetles are hibernating get near 50 degrees F, some beetles will wake up and begin crawling around. Some or many will then find their way into inhabited areas of the house.

When they get into the house during the winter, I see many of them gathered on and around windows, but for the life of me, I cannot find any cracks or gaps around the windows where they may have gotten into the house. How can this be?
These insects are photopositive — they move toward the light or towards the window in this case. Insects also have very small brains. They can’t figure out glass and why they can see the outdoors, but can’t get there! They have found their way into living areas by other routes and have only ended up on the window.

In the fall, I see Asian lady beetles feeding on ripe fruit. I thought they were predators?
Even a grizzly bear doesn’t eat meat all the time. The multi-colored Asian lady beetle is no different. As the growing season, wanes so does the availability of prey. It is not uncommon to find these beetles looking for sugar-laden fruit at this time of year.

I had one of these beetles crawling around on my arm, and I think it bit me. Do they all bite?
Some bite, most do not. Sometimes the Asian lady beetles bite the skin, but often this stinging sensation is actually caused by small spurs on the beetle’s legs pricking skin as they move and evaluate whether or not the skin is a food source. The beetle does not carry disease nor does it have any toxin associated with its mouthparts. In most cases, the pain is short lived. If the bite concerns you, apply antiseptic to the site.

I heard that if you crush one of these beetles or have enough of them inside your home they give off an unpleasant odor. Is that true?
When multi-colored Asian lady beetles are agitated they give off a yellowish fluid that has a faint, foul odor. This is a defensive reaction to ward off predators. It is called “reflex bleeding.” The liquid is exuded from its legs and it can stain.

Could I be allergic to the multi-colored Asian lady beetle?
Yes, it is possible to have an allergic reaction to the multi-colored Asian lady beetle. Prolonged exposure to infestations has been reported to cause allergic reactions in some humans (Yarbrough et al 1999, mangnan et al. 2002). Patients have described itchy nose and eyes, sneezing, upper respiratory symptoms, and severe, persistant asthma. Here are some references about research in this area:

Can we expect large numbers of multi-colored lady beetles every fall trying to get into the house?
Probably not. The number of predators is pretty much regulated by prey availability. There are other variables including disease and climatic conditions. The multi-colored Asian lady beetle population will rise and fall with that of the insects they prey upon, especially aphids.

Do they cause any damage to the house, get into food, that sort of thing?
Multi-colored Asian lady beetles are harmless. They cause no harm to a building or its contents, including people and pets. However, when they show up inside the house by the dozens or hundreds, they usually wear out their welcome.

Where do these beetles go in the spring?
As soon as the weather warms in the spring, the multi-colored Asian lady beetles begin emerging from their winter quarters. They will continue to do this until they have all departed for the season. After they leave, they will look for food, mate and the females will begin laying eggs on foliage. A short time later both males and females will die.

What can I do to control them around the house, and, better yet, keep them out of the house in the first place?
Even though there are measures that can be taken to eliminate the beetles as they appear in the house, the long-term solution to eliminating your beetle “problem” in the house is prevention.

Outdoors preventative tactics
Beginning in the early fall, monitor the sunlit side of your buildings for swarming beetles. These are areas where they will collect prior to moving into hibernation sites. You can apply an insecticide registered for outdoor use. If it is practical, caulk obvious cracks and spaces where the beetles can gain access, check attic vent screens and repair if necessary, caulk wherever a pipe, conduit, telephone or cable TV wire goes through the siding, and ensure that the weather seal on basement windows is tight.

Indoors preventative tactics
Making the effort to eliminate points of entry from the outside into hibernating areas is helpful. The real key to prevention is to also conduct the same inspection on the inside walls and make repairs, where necessary. After all, you probably wouldn’t care how many multi-colored Asian lady beetles were hibernating under your siding, in your walls voids and attic if none of them entered your living space. Pay close attention and caulk all those places where pipes, conduits and wires come through the walls. You can use an insecticide indoors, but we don’t recommend it. Why? One of the biggest reasons is that the weather outdoors is still cool or cold and the furnace is running. That means the house is closed up and the insecticide is being re-circulated throughout the home — probably not a good idea. Additionally, when the bugs you have sprayed die, you will have to clean them up anyway. That is why we suggest using a vacuum to eliminate the beetles. A dust buster-type vacuum is ideal because it has a bag that can be emptied.

I’ve had it with these bugs! If they show up again in my house I’m going to call the exterminator and be done with it. What do you think about that?
That is certainly another option. However, pest control businesses are usually reluctant to treat for multi-colored Asian lady beetles in the living quarters. Probably the main reason is that they cannot guarantee their elimination for any length of time. They are able to kill the beetles wandering around when they are treating, but have no practical, cost- effective method of getting to areas where the hibernating beetles have massed.

If I discover where the beetles are hibernating in the wall voids, will household insecticides kill them all?
You probably won’t kill very many at all. Why? If you live in Michigan and you discover hibernating beetles, it means that it is either late fall, winter or early spring, at the latest. At this time the insect’s physiological activity is near nil and the chemical activity of the insecticide is near nil also because of the low temperatures.

Here is a picture of comparison by The Spruce 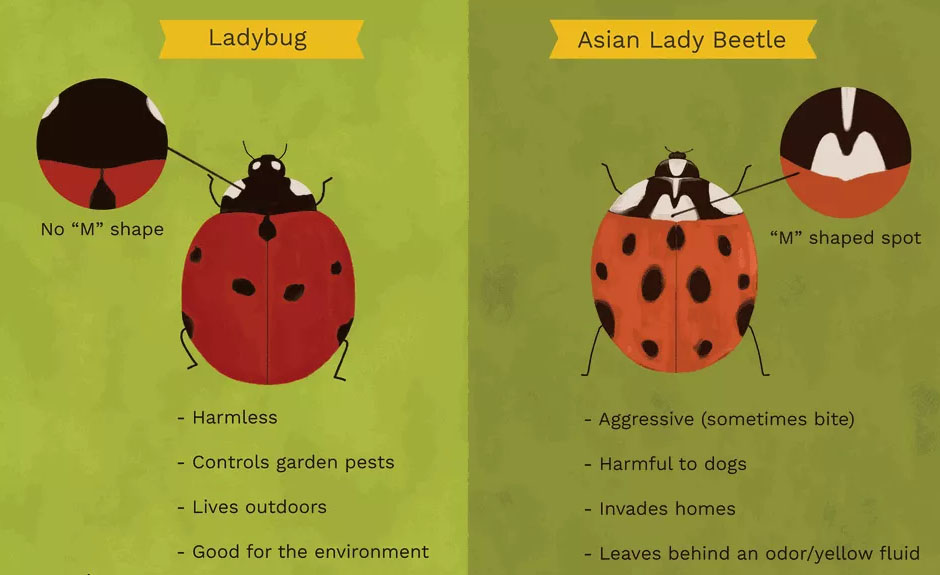